Fans gathered early at the Shanghai Baoshan Gymnasium on April 13th as they geared up for 6 hours of sports and games with members of SNH48 Group!

The 2nd SNH48 Group Sports Meeting went into full swing at 2pm (local time) and was broadcasted Live on IQIYI. A selection of members from all the active teams of SNH48 Group were participating. CKG48, which still officially does not have teams despite becoming active again, was not participating.

You can watch the entire sports meet from the official SNH48 Youtube channel at top of page. Specific events are covered in individual videos further down.

Each participating team made their entrance into the gymnasium which was followed by “Everybody Go!” the theme song of the event.

Watch the intros in the video below.

The competition included a total of seven events with SNH48 Team HII coming out as the grand winner! 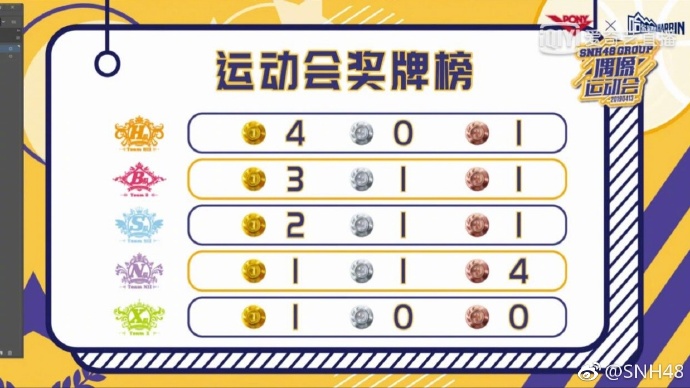 The results for the invidividual events are as follows.

As with most major events, SNH48 had a few announcements in store for fans. These came in the form of a promo video featuring several pieces of news.

3 new original stages are coming our way over the next few months:

3. “Victoria.G” from GNZ48 Team G will premiere this summer

Two new MVs are soon to be released:

SNH48 has revealed the name and the debut date of the new subunit that was created during the 2019 Best50 Request Time concert.

Tucked in at the end of the announcements was the news that the date of the upcoming SNH48 Group 6th General Elections had been officially confirmed for Saturday July 27th, 2019 at the Mercedes-Benz Arena in Shanghai!

Two of the SNH48 subunits offered performances for the fans during the event. SEN7ES sang their latest single “7 O’Clock” while BlueV went with “MAMI” from their 1st EP (both below).

The event also included a mini fashion show featuring products from one from brand PONY which was one of the two sponsors (Harbin Beer being the second).

Congratulations to all teams!

3 27
3 hours ago
As the #SNH48 subunit #SEN7ES is preparing for their upcoming tour, here is a theater PV for "沙漏 Sandglass"This was recorded prior to the departure of Kong XiaoYin (Bee) from the grouphttps://t.co/QScTbNiAuR
1 17