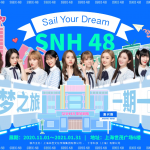 After several months of work, the SNH48 historical exhibition featuring the recently graduated members of the 1st generation officially opened its doors to the general public on November 1st, 2020.

Located on the 6th floor of the Shimao International Plaza in the Huangpu District of Shanghai (in the very center of the city right across from the People Square subway station one of the busiest in the country), this interactive exhibition organized in collaboration with DreamChase (the company that ran events during the 7th elections and the handshake for the 7th anniversary of the Xingmeng Theater) filled with photos, videos, and souvenirs of all kinds will be open until January 31st, 2021.

The venue normally holds displays with characters from the popular “Hello Kitty” franchise, so these have simply been incorporated into the overall display.

Watch the promo video at top of the page and some photos of the exhibits below.

16 minutes ago
The schedule for the upcoming #GNZ48 stages including special stages, "Trigonometric Functions" by Team Z, and the return of "Victoria.G" by Team G on June 19th https://t.co/r6OFzp925a

2 1
6 hours ago
#SNH48 and Sina Weibo Star Chart once again collaborate this year for the 8th General ElectionsAs in past years, fans will be able to cast votes on Sina Weibo (not linked to actual election votes) with rewards being given to members during the period leading to the election https://t.co/EwnsHceJQH