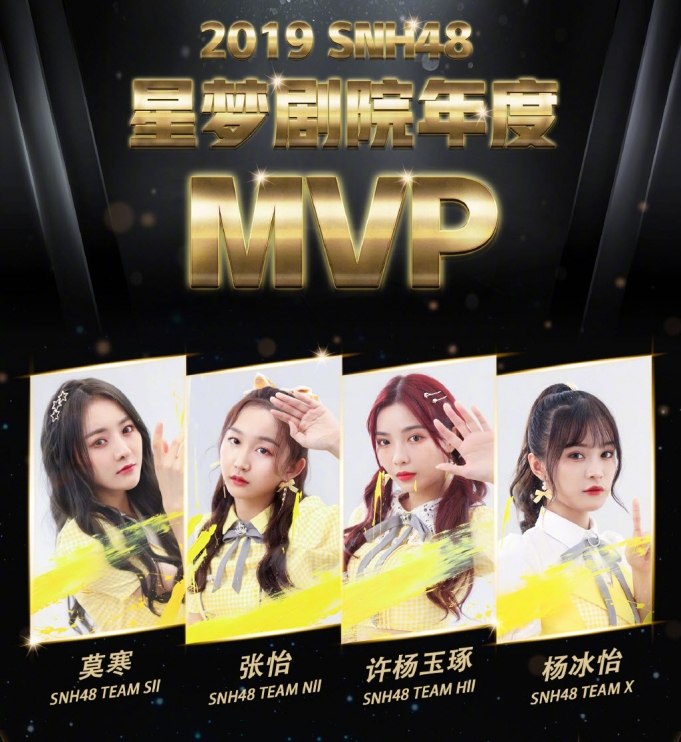 SNH48 announced on June 30th the list of its MVPs for the 2019 seasonIn SNH48 Group, a "year" runs between two elections and a "season" runs between the anniversaries of the first ever performances in theaters.. SNH48 made the announcement earlier due to the 7th General Elections taking place in August and the expected high level of activity related to the 1st generation graduation events in the Fall.

The MVP awards are voted by fans at the end of every SNH48 stage performance at the theater. Fans cast votes for who they think contributed the most that day. Results are then tabulated at the end of the season.

Rewards for the winners include cash prizes, special promos at the theater, posters, and stage performances amongst others.

In a record that is unlikely to be broken anytime soon, Mo Han (Momo) of Team SII has managed to reach the top of the voting for a 4th consecutive year. In fact, she has never left that spot since the MVP concept was first introduced in 2015.

As she gets ready to graduate from the group like all first generation members in October 2020, this is a fitting reward for one who has come to represent the “classic idol” within the group.

5 minutes ago
[FANCAM] #SEN7ES performs the encore of their "The Shadows" tour in the city of Chongqing (home of #CKG48) during the #SNH48 Group Sprinf Festival tour in the city on January 21st, 2021https://t.co/FSw2ChAF60
1