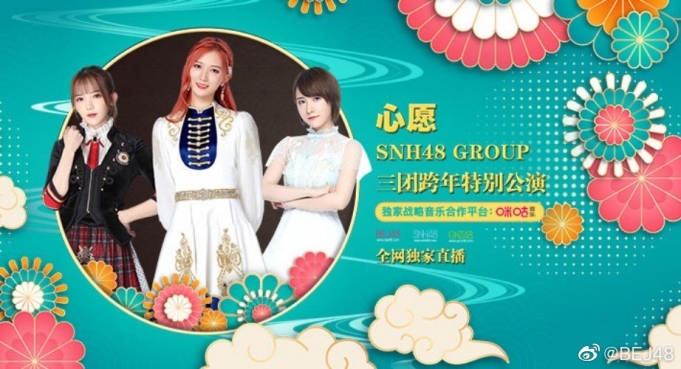 SNH48 Group and Migu Music presented three exclusive New Year’s Eve stages on December 31st in Shanghai, Beijing, and Guangzhou. Streamed nationally on the Migu Music network and on Youtube for international fans, these were countdowns to the new year events.

SNH48 presented a special joint stage with a selection of members from all teams for their New Year’s Eve stage. This was, in part, due to many top members being away in Guangzhou and Beijing for other events.

In Beijing, it was Team J that welcomed fans on the evening of December 31st for their fun and games filled special stage counting the way down to 2020.

Last, but certainly not least, was a special performance by Team G in Guangzhou where members of SNH48 and BEJ48 who are participating in the taping of the new IQIYI “Youth With You” season in the city stopped by for an afternoon fan meet (read all about it in a seperate article).

The official "Pocket48" Youtube channel has been hacked. As a result, some videos are no longer available. We are presently in the process of uploading videos to our channel to replace the links. Stay tuned!
MORE STORIES
SNH48

September 21, 2019
Dai Meng (Diamond) and Kong XiaoYin (Bee) of SNH48 Team SII and subunit SEN7ES were out as a duet on September 21st in Shanghai...
We use cookies to ensure that we give you the best experience on our website. If you continue to use this site we will assume that you are happy with it.Ok