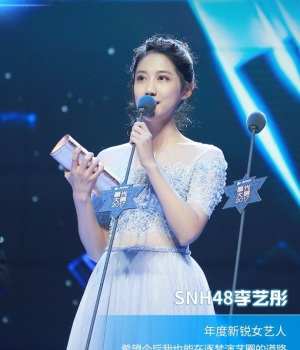 The 2017 Tencent Star Awards which celebrates the best of China in music, film, and TV (including web only dramas) were held in BeiJing on December 3rd.

of SNH48 Team NII was the only representative of SNH48 Group at the awards ceremony although both BEJ48 and GNZ48 participated in the pre-show as we previously reported.

Li YiTong walked away with the “New Female Artist of the Year” award. Here she is accepting the award.

1 hour ago
New #SNH48 vlog with behind the scenes of episode 3 of the travel variety show featuring Jiang Yun and Wang XiaoJiahttps://t.co/WRePqTk1tm
3
1 hour ago
With her graduation just a day away, #SNH48 announces the release of a special photo book and other souvernirs for Lu Ting of Team NII (2nd generation) https://t.co/ODlnyxarAv