On July 28th, SNH48 Group entered a new phase in their development as they successfully held their 5th General Elections.

SNH48, BEJ48, GNZ48, SHY48, and (for the first time) CKG48 members were present to find out who won what has proved to be a vote high in drama with the sudden rise of sister groups.

Li YiTong of SNH48 Team HII did not dissapoint her fans by taking over the crown with 402,040.40 votes! This is the highest number of votes ever achieved in any 48 group.

Watch the show in two parts (part 1 at top of page and part 2 below).

Like at any major event, STAR48 used the high visibility of the elections to make several announcements. Some of these had already been revealed but there were a couple of surprises.

The first surprise of the evening was the announcement that the 2018 Fashion Show would be held in Beijing while the 2019 Best50 Request Time concert would be held in Guangzhou. This is the first time those events will take place outside of Shanghai. 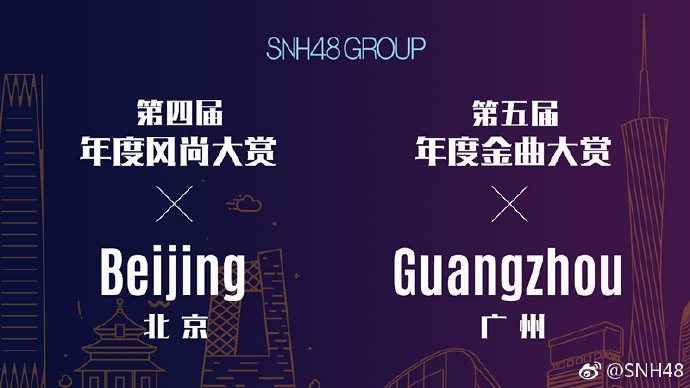 The second news of the day was that STAR48 would be collaborating with MV production company Zanybros in South Korea (also runs the ZBLabel) to open the first SNH48 international training center which will offer Korean style idol training.

As had been previously announced on June 9th, SNH48 Group will have two new variety shows in the coming months: “Idol”s War” which will have the top 4 members of the elections select teams that will compete against one another in an elimination style talent show. The second show will be “The Battle of Idol Groups” which will see all 15 teams of SNH48 Group compete as teams against the others.

The last surprise fo the night was the announcement that SNH48 Group was developping a new show (tentatively titled “Super Girls Group”) which will be very similar to the “Produce 48” show currently airing in South Korea. The show will see 48 members of SNH48 Group + 10 members of the Top 16 at the elections compete with 48 new talent. The competition will lead to the formation of a new 9 member idol group.

Here are the results of the SNH48 Group 5th General Elections:

The consequence was a drop in the votes of individual members in some of the ranking even though the total number of votes still blew the record from last year.

If you watch the listings above and below closely, you will notice how many new faces from the sister groups have suddenly appeared in the ranking. This has caused several veteran members to drop in numbers or be taken off the board altogether.

You can also notice a concentration of votes at the top with the winner building a gap of 200K votes!

Here is the breakdown of the Top 16 overall: 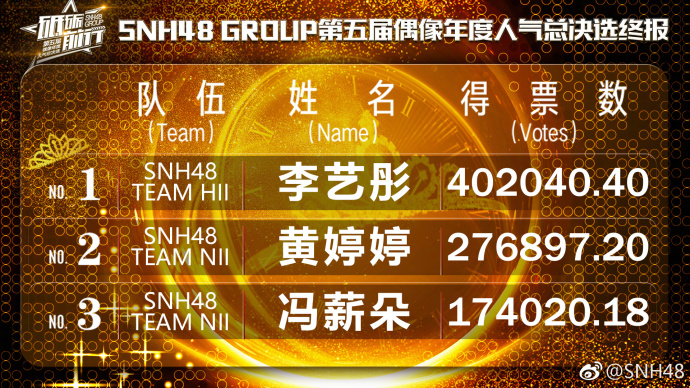 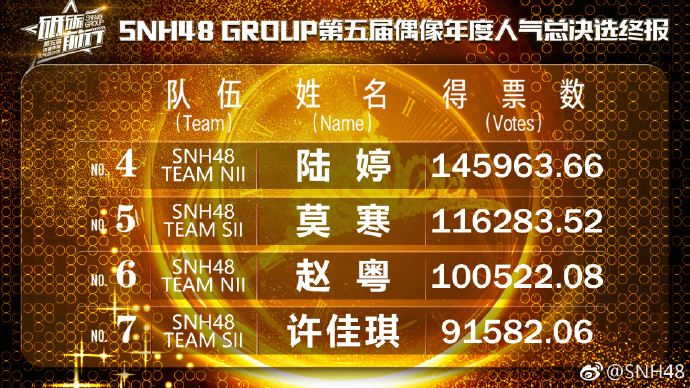 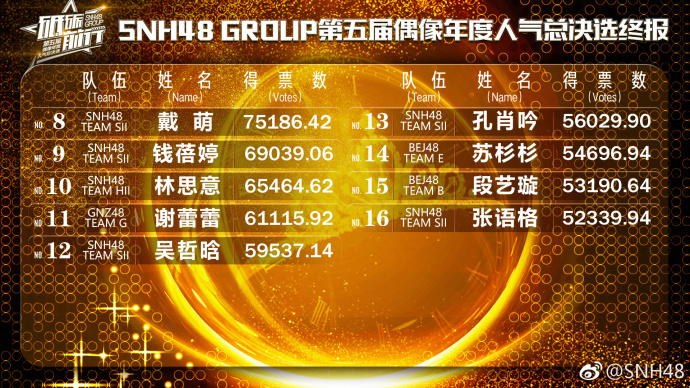 As per last year, each of the four SNH48 sister groups (BEJ48, GNZ48, SHY48, CKG48) also had their own respective Top 16 ranking based on election results.

15 43
5 hours ago
#SNH48 Team SII will celebrate its 8th anniversary with a special Halloween stage on October 30th https://t.co/pbJXTHGEBV