Yes, you heard that right. Sale numbers are irrelevant.

In a world where number of CDs/DVDs sold is no longer the result of hits or popularity but of gimmicks (trend started in Japan but adopted all over the world now in some form or another) like concert tickets, votes, handshakes, meet & greet, or even “preferential access”, counting how many units were sold no longer matters. SoundScan, Oricon, Billboard… all next to meaningless.

Even SNH stands like a sore thumb in China because the actual sale of music there is almost non-existant (compared to the size of the country). SNH manages to sell millions of CDs and should be proud of it but that’s about it.

The only thing that ever really mattered is the mighty dollars (or Yuan in our case). It is interesting to note that, since there are no sales trackers or charts in China like elsewhere in Asia, people are much more interested to know about revenue than units sold. 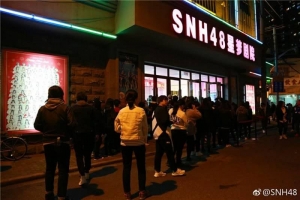 If you read various articles published recently around the elections, you will note that several will make mention of how much money SNH48 Group generates or that investors put into but make absolutely no mention of CD sale numbers. That gets bundled up with a number of other things.

Except for Japan where the CD industry is still heavily protected, streaming revenues are consistantly exceeding physical sales for the first time. It is no longer about how many CDs you sell. It is about how many views you get.

The whole “buy multiple of the same CD just to throw it away” is even drawing the ire of environmentalists these days.

Does that mean the CD is dead? In the long term, probably. Does it mean the end of gimmicks? Of course not. That is how groups make money now. They will simply find something else to attach them to in the future.

Want a handshake ticket with your fries?